This is Joe Doggett's article published in Houston Chronicle newspaper. Features Jim Ince with a brief interview with me at the end. On line version posted February 8, 2006 is below the scan, posted first. One of the best falconry articles that I have seen published, even given a couple of minor technical errors, which are inevitable in this kind of writing. Also, I believe that it was Randy Kocurek that said "(I) hope to one day fly a peregrine," though it was attributed to me. 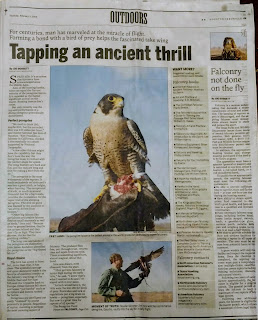 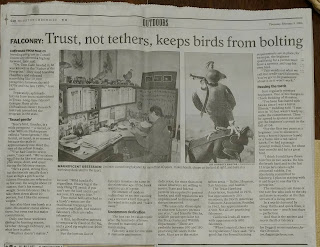 Feb. 8, 2006,
Forming a bond with a bird of prey helps the fascinated take wing

Speed kills. It's an axiom that falconers have acknowledged since the Middle Ages. And, of the hunting hawks, none can equal the flat-out velocity of the peregrine falcon. It is regarded as the fastest significant animal on the planet. Buzzing insects don't count.

But only recently was the top-end performance of a diving peregrine scientifically documented.

Perfect peregrine
"We used to think 180, maybe 200, but the recorded dive was 240 miles per hour," said master falconer Jim Ince of Houston. "Ken Franklin, a falconer in California, clocked it electronically in a study supported by National Geographic.
"A few other falcons might have the capability but they don't hunt the way the peregrine does; it evolved with the perfect shape for speed. The wing feathers are hard and flat, and the toes are long and thin for raking a bird from the air."
The peregrine is the most widespread of the raptors. It feeds exclusively on birds and it reaches a great pitch, or height, when hunting. The exceptional altitude, as much as several thousand feet for a big female, provides the momentum for the vapor trail of the stooping peregrine. The dive on game was likened by the ancients to "an arrow driven from heaven."
"Other big falcons like gyrfalcons and prairie falcons feed on small mammals as well as birds," Ince said. "Because they're ground feeders, they're not as specialized and they don't fly as high. They have shorter, thicker feet for grabbing rabbits."
The long toes and talons of the peregrine are distinctive; John James Audubon identified the peregrine as the "big-footed falcon."

Royal choice
The bird has speed to burn but, more than that, it has class. The splendid carriage and quiet demeanor made it the favorite of medieval royalty as the falconry teachings of the Middle East and Far East followed the Crusades back to Europe. Other falcons fell short and lesser "pot hawks" such as accipiters and buteos ranked far below.

Peregrines are intelligent yet easily "manned" to accept proximity to people. Regardless of raptor, manning is perhaps the most amazing aspect of falconry. The predator flies free, yet, through trust, returns time and again from the wild. There is something significant, almost magical, about that bond.

Ince was drawn, even obsessed, from the start.
"I first got into falconry in junior high during the early '60s," he said. "I knew that's what I wanted to do and I've stayed with it ever since.

"As luck would have it, the '60s were the low ebb for birds of prey. Pesticides and lack of regulations put a big drain on hawks — peregrines, especially. But now is a great time for raptors of all species."

The Peregrine Fund breeding program at Cornell University offered a big leap forward, Ince said.
"Dr. Tom Cade headed it; he was known as the 'Father of the Peregrine.' They used breeding chambers and released something like 10,000 peregrines between the mid-1970s and the late 1990s," Ince said.

Separately, aplomado falcons have been reintroduced in Texas. Long-time falconer Granger Hunt of the Chihuahuan Desert Research Institute assembled the program in the state.

'Tassel gentle'
Ince's bird, Gaucho, is a male peregrine — a tiercel, or what William Shakespeare called a "tassel gentle." The tiercel, or tassel, is so-named because the male is approximately one-third the size of the robust female.

"He's a good, strong flier, but the tiercels usually don't have as high a pitch as the falcons (females are referred to as falcons). He weighs about 19 ounces; that's his normal weight. Some falconers like to take them down about 10 percent, but I like the normal weight."

Ince also likes one hawk at a time. His master status allows three, but even one is a major commitment.

Daily one-hour workouts during the hunting season, October through February, are what Ince is after.

"Weather doesn't matter," he said. "Wild hawks fly regardless. Heavy fog is the only thing I'll avoid; if you can't see the bird and it can't see you, it's easy to lose."

Fine metal bells attached to a hawk's wrists are the traditional trappings for monitoring flight, but modern falconers often use radio telemetry.

A thin, inoffensive antenna is temporarily fixed on the leg, and a good rig might cost $600 or $800.

But the bottom line of falconry remains the same in the electronic age: If the hawk wants to go, it's gone.
No amount of modern technology or ancient cajoling can a recover a bird that gets the wind in its sails and "rakes away."

Uncommon dedication
The loss can be catastrophic after the hundreds of hours devoted to manning and maintaining.

Falconry is not for everyone. It demands uncommon dedication, far more than most casual observers are willing to invest. State and federal permits are required to possess hawks, and stiff regulations are implemented to discouraged the uncommitted.

"We issue only about eight or nine new falconry permits per year," said Jennifer Blecha, wildlife permit specialist for the Texas Parks and Wildlife Department. "There are probably between 100 and 150 practicing falconers in the state. Most are in the major urban areas — Dallas, Houston, San Antonio, and Austin."
The Texas Hawking Association, founded in 1970, has approximately 250 members; the North American Falconers Association, founded in 1962, has approximately 2,500. Not all are practicing falconers.

California leads all states with approximately 800 falconers.
"When I started, there were no regulations," Ince said. "It's good that the formal training requirements are in place; for example, the beginner qualifying for a permit must have a sponsor and trap his own bird.

"This weeds out what we call the credit-card falconers. You've got to be passionate about it or it won't work."

Passing the torch
Ince regularly mentors beginners. One of his charges is Chuck Redding of Houston.

"I've been fascinated with hawks since I was a kid in Illinois," Redding said. "I met Ince in '02 but wasn't ready to make the commitment. Then he agreed to sponsor me and I got the beginner's permit in the fall of '04.

"For the first two years as a beginner, you're allowed to keep a kestrel (sparrow hawk) or a buteo like a red-tailed hawk; I've had a passage (young) redtail, Cisco, for about four months and he's a great bird.

"I think I could have flown him free in two weeks. He hits the brush hard and in the last 12 trips he's taken eight cottontail rabbits. I'm absolutely committed to falconry; I plan on staying with it and hope to one day fly a peregrine."

The sentiments are those of the rare few who look to the sky and stare in wonder at the thin scream of a living arrow.
In a world cluttered by cheap thrills and quick fixes, it is rare to see — much less share — perfection.

And that is the ancient and secret thrill of falconry.